Elli, a cat whose coat is constantly changing…😻❤️

A woman named Nicole found Elli, a beautiful Tuxedo kitten, and her sister Rosie on a farm in Germany.

The cats were just four months old and wouldn’t have lasted much longer without help. Nicole bought the kittens home and nursed them back to health. Elli and Rose had such beautiful coats as well as warm and loving personalities. 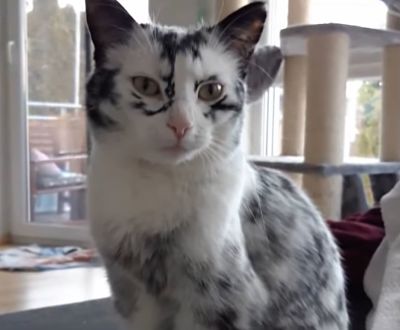 From the beginning, Elli was a bit different compared to other cats as she showed her honest affection and was extremely cuddly.

Six months after Nicole adopted them, Elli started to change. A soft white streak appeared on her previously stark black shoulder, so Nicole took her to the vet to find out what was going on.

She was surprised to learn that Elli had vitiligo, a very rare skin condition that affects the skin and fur. Luckily the effect is purely aesthetic, so doesn’t bother the cat at all.

A year after Elli came into Nicole’s life her black and white coat had turned into a dazzling display of dappled grays. Even though Elli’s coat is constantly changing, her personality is still as gorgeous as ever.