Olympic skier Gus Kenworthy makes a habit of rescuing dogs whenever he goes. While many Chinese cities banned the trade of cat and dog meat, the use of these animals for human consumption is still quite widespread across South Asia. Gus Kenworthy, an Olympic freestyle skier, saved countless dogs from the South Korean meat trade and gave them a much brighter future, on his latest trip to the country.

After winning a silver medal for the US team in the 2014 Olympics in Russia, Kenworthy took part in the 2018 Winter Olympics in Pyeongchang, South Korea. He didn’t bring back a medal with him, but he brought something much better. While loving almost everything about the diverse and fascinating country, there was one aspect of his trip he couldn’t ignore.

On one of his drives to a skying resort, the silver medalist witnessed some horrific animal abuse, that tore his heart out. It was a dog farm that kept doggos cramped together in unimaginable conditions. Being a winner at heart, Kenworthy didn’t run away from the problem or judge the people working on the farms. Instead, the man asked to visit one of those farms, to better understand the circumstances.

Kenworthy posted on his Instagram account: “This morning Matt and I had a heart-wrenching visit to one of the 17,000 dog farms here in South Korea. Across the country there are 2.5 million dogs being raised for food in some of the most disturbing conditions imaginable. Yes, there is an argument to be made that eating dogs is a part of Korean culture. And, while I don’t personally agree with it, I do agree that it’s not my place to impose western ideals on the people here. The way these animals are being treated, however, is completely inhumane and culture should never be a scapegoat for cruelty,”

Despite his goodwill, there was no way Kenworthy could have expected the sights that awaited him on the farms. The doggos were kept in tiny kennels that barely left them enough room to turn around. They were malnourished and often beaten by the ‘caretakers’, who left them to fend for themselves against the harshest weather conditions. Their slaughter wasn’t done humanely either. “When it comes time to put one down it is done so in front of the other dogs by means of electrocution sometimes taking up to 20 agonizing minutes.”

Following his visit, the manager of the farm came to realize the “error of his ways” and permanently shut down the facility. But the kind animal lover knew that the doggos still need him. With the help of the Olympic skier, more than 90 dogs were saved and flown to the US and Canada. Once there, the dogs were rehabilitated and rehomed in loving and caring forever homes. Kenworthy and his boyfriend even adopted one of the dogs themselves. The two vowed to ”give her the best life possible.” Kenworthy concluded his post by writing: “I’m hoping to use this visit as an opportunity to raise awareness to the inhumanity of the dog meat trade and the plight of dogs everywhere, including back home in the US where millions of dogs are in need of loving homes! 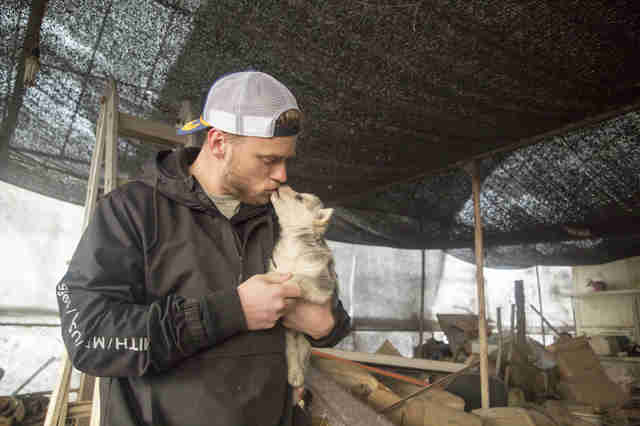 We need more people like Gus in this world! Thank you Gus Kenworthy for taking a stand and making a change!

Show your respect to the Olympic skier who saved all these helpless dogs by sharing this story!