She was shivering, emaciated and scared – These four wonderful boys saved her life 💝😘😘

It breaks our heart to hear stories of dog’s being abandoned, and this next one wouldn’t have had a happy ending if it wasn’t for three brothers and their friend who just so happened to be in the right place at the right time!

After finding an abandoned dog tied up with bungee cords, they didn’t hesitate to rescue her and keep her safe until help arrived.

A severely starved dog was tied at the back of a house. The boys knew the poor animal was in a very bad shape and didn’t want to live her there. Soon, the quick-thinking boys untied the dog from the bungee cords, wrapped her in a jacket, and took her home.

They named the dog Sparkle and were determined to help her turn into a healthy dog again. They gave her food and water and made sure she was comfortable. As they were walking Sparkle around the neighborhood the following day, they came across members of the Detroit Pit Crew Dog Rescue and told them the whole story. This encounter was pure luck.

The rescuers took Sparkle and rushed her to the vet’s. Besides being starved, she also had mange and it was obvious she had been severely neglected.

Later, the shelter staff shared Sparkle’s story on their Facebook page and thanked the young heroes for their good deed. “You could tell they really love this dog,” said Theresa Sumpter, the organization’s founder, speaking to WDIV.

They were protective of the dog and wanted to make sure the dog was going to a good place. 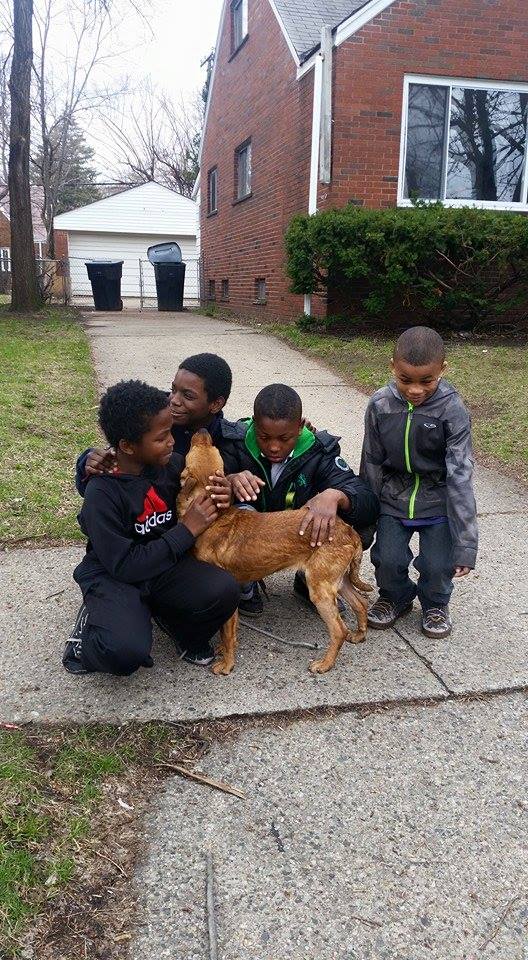 The vet determined Sparkle didn’t really have mange as the rescuers thought, but it looked like that because she was very thin. Luckily, that meant she could be put up for adoption sooner than they expected.

As for the boys who saved her, they didn’t stop there. After Sparkle’s rescue, they saved two other dogs from the streets. We really think that a congratulations is in order for these four boys who are doing their bit to help the animals in need. We bet their families are so proud of them.